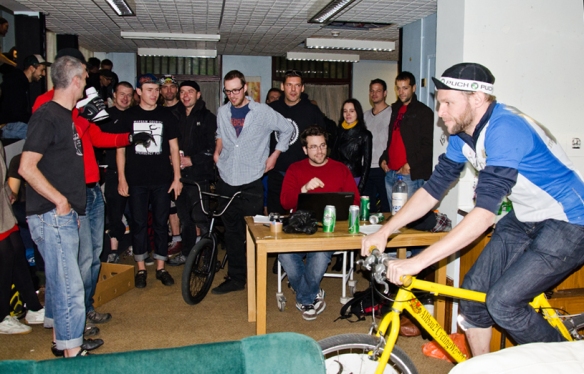 An email from emi asking about rules and the process of an altbauradkriterium, which she saw at bff London started a trip based on passion, spontaneity and the weird love to racing bicycles indoors for 5 people and 2 bikes.

The email hit the WACS (World Apartment Cycling Syndicate) on Wednesday 10th and thanks to a very professional and highly motivated crew the air travel was booked and travel arrangements, work layoffs, packaging for the bikes and lots of other things where accomplished within hours. On Friday 12th five apartment-racing fanatics including the reigning world champion, the timekeeper, admissions/photography and the commentator hit a plane to London.

Although getting the two huge boxes from Liverpool Street Station to the squat, a former retirement home, turned out to take 4 hours and getting picked up was disturbed by broken down cell networks the WACS unboxed and mounted the bikes and checked the possible track immediately at arrival. After a night on the floor, breakfast and some sightseein‘ in Brixton, the track was heavily discussed and doors where dismounted in other parts of the complex and duct taped to the glass corridor.

Around 3 pm the first racers showed up and the training session was chaotic and fun as always. The riders from Austria realised that most of their opponents where highly trained and skilled bicycle couriers from different parts of GB and the world.

The first heat ended with an unexpected lead of georg „the klempner“ klempa and a world champion relegated to the second place. The local riders showed great skill and aggressive stile but lacked experience, since it was the first altbauradkriterium ever held in the UK. But still James D‘ awesome, superkid and Joe finished the first heat within the first 10 riders. Best rookie at heat one was luckyluke, finishing 4th at his first altbauradkriterium ever.

During the 2nd heat rain and darkness forced the WACS to cut the track for about 25m by not riding the garden. The U-turn to the staircase and the ramp downwards forced lot of penalty laps and crashes so the second heat ended up being more spectacular than the first one. The consumed cider and beer for sure wasn’t very conducive to this trend.

The WACS wants to thank emi, tokyo fixed, look mum non hands, El Zutterino, Martina RADhofer, Georg „the Klempner“ Klempa, all Residents of the squat and all riders who dared to race a squatted retirement home.

London was a great experience and we learned that if there is somebody willing to do a bicycle race in his lodging, no matter what kind, we can do it!

The video material is already on the way to mucharlivingpictures‘ editor in Toronto, the one and only christl clear and should be done in about 2 weeks’ time, photos will be online within the next couple of days.

no family, no friends, no pain – altbauradkriterium!